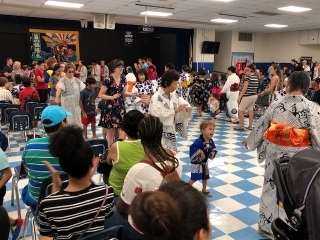 BonFest Pensacola on September 7, 2019
On August 20, 2021, the Ministry of Foreign Affairs of Japan announced that the Japanese Foreign Minister’s Certificate of Commendation was awarded to the following individual for their contributions as described below.

The Foreign Minister's Commendations are awarded to individuals and groups with outstanding achievements in the international community to acknowledge their contributions to the promotion of friendly relations between Japan and other countries. We would like to announce the commendation of the following distinguished individual from the area under the jurisdiction of the Consulate General of Japan in Miami.

Ms. Hatsue Miki
<Summary of Contributions>
Since moving to Pensacola City, Florida in 1963, Ms. Hatsue Miki has furthered cross-cultural understanding between Japan and Florida through her involvement with various organizations. In 1988, she founded the Japan Cultural Society of Northwest Florida, a nonprofit organization dedicated to the promotion of Japanese culture. Since its founding, the Japan Cultural Society of Northwest Florida has conducted numerous activities to introduce Japanese culture in local schools, nursing homes, and hospitals. In 2004, she founded BonFest Pensacola, an annual event celebrating Japan’s Obon holiday. As the Director of BonFest Pensacola, she organized activities such as Bon dancing and taiko drumming performances, to promote an understanding of and appreciation for Japanese culture.